1) Hojo Ujiteru and the Construction of Hachioji Castle 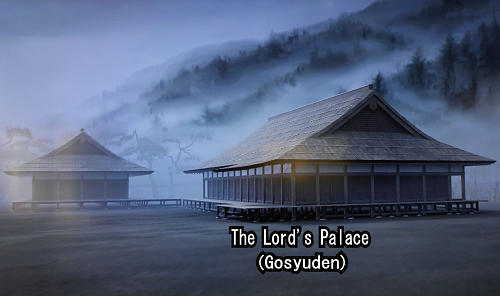 (Using from The story of Hachioji Castle)


Hojo Ujiteru was one of the powerful feudal lords during the Warring States Period.
He was born as the third son of the Odawara based Hojo clan who ruled all of the Kanto Plain.
After Ujiteru became the lord of Takiyama Castle, he had to construct a new castle to replace Takiyama Castle. This was to defend against Toyotomi Hideyoshi's rapid expansion across the whole country. Ujiteru started to build Hachioji Castle and moved there around 1586 while it was still under construction. 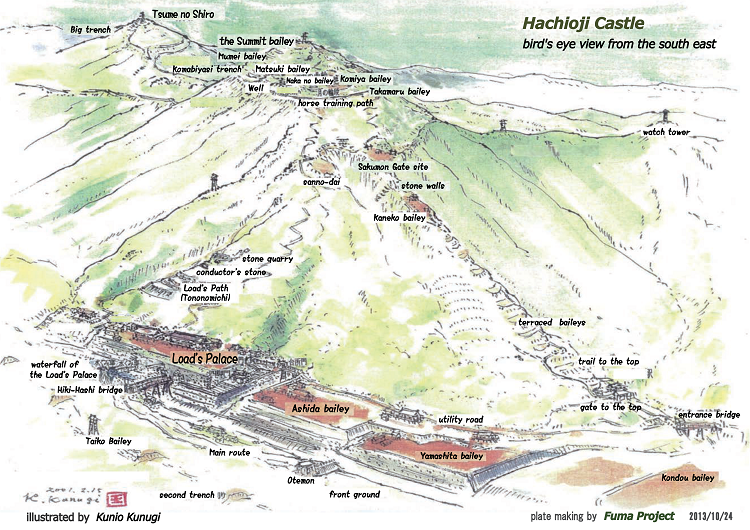 Hachioji Castle is a mountain castle. The mountain is called Fukasawayama or Shiro-yama. There was a residential area at the southern foot of the mountain. The Lord's Palace(Gosyuden) was located there and was considered to be the castle headquarters. The mountain top area was the fortress. It stands 460 meters above sea level. It consists of the Summit Bailey and is surrounded by several other baileys. Hachioji Castle had no main keep.
Castles during this period were frequently structured with a fortress on the top of a mountain and a residential area around the foot of the mountain.

3) The Fall of Hachioji Castle 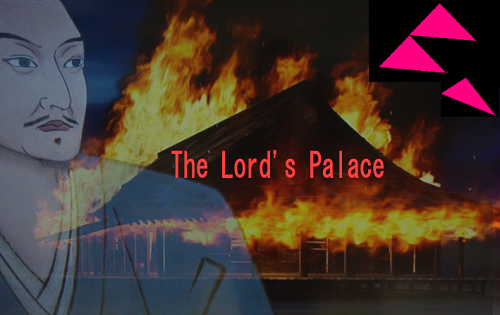 (Using from The story of Hachioji Castle)


Toyotomi Hideyoshi advanced on Odawara with his massive forces in March of 1590.
Meanwhile, the northern forces which were led by Maeda Toshiie and Uesugi Kagekatsu invaded southward into the Kanto Plain until they were finally gathering in front of Hachioji Castle.
At this time, Ujiteru and most of his forces had gone to the siege of Odawara Castle leaving only a skeleton defense at Hachioji Castle. On June 23, Hachioji Castle fell in only one day due to a fierce attack by the overwhelming forces. The fall of Hachioji castle triggered the downfall of the Hojo clan. The Hojo surrendered Odawara Castle on July 5 and Ujiteru with his brother Ujimasa were ordered by Hideyoshi to commit suicide (seppuku) ending their lives. 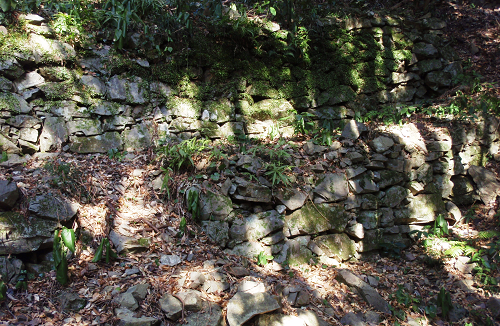 The palace area was entrusted to the Tokugawa. This area was maintained in good condition because there was little influence by people. The area was besieged by landslides of rocks and earth from 1650 through the early 1900s covering much of the castle ruins. This area looked like an ordinary forest until only 30 years ago.

Fortunately, an old drawing of Hachioji Castle was discovered. The drawing pictures the castle around 1648-1649. This drawing contributed to the excavation research. Stone walls, stone stairs and the remains of an ancient structure were unearthed. The main road, the Hiki-hashi (drawbridge), the stone walls and stairs were reconstructed in 1987-1990 based on the excavated ruins. Now we can trace the main road from the Otemon(main gate) to the front entrance of the residential area. 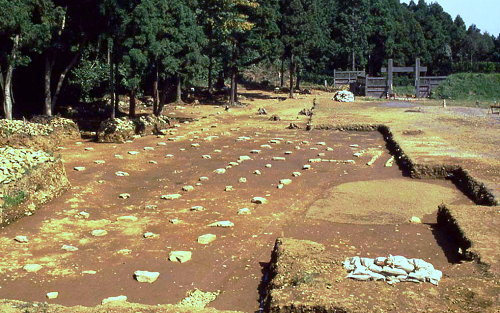 Two years after the original reconstruction, a deep excavation was done at the residential area in 1992-1993.
Many foundation stones that were mainly used for two large buildings were uncovered. One of those buildings was The Lord's Palace and another one was a guest house. Other structures were also unearthed. Vast remains of broken pottery from China and Japan were also discovered, including broken pieces of Venetian lace glass, a very rare item in Japan. Many weapons, arrows, and bullets were also uncovered, evidence of the fierce battle that was fought here. 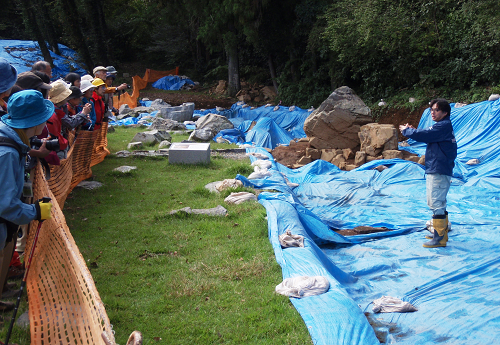 Researchers have again excavated the residential area. The remains of a traditional Japanese garden, including ponds and rock arrangements have been discovered. This was very rare on the Kanto Plain at that time. It's a fantastic discovery !!